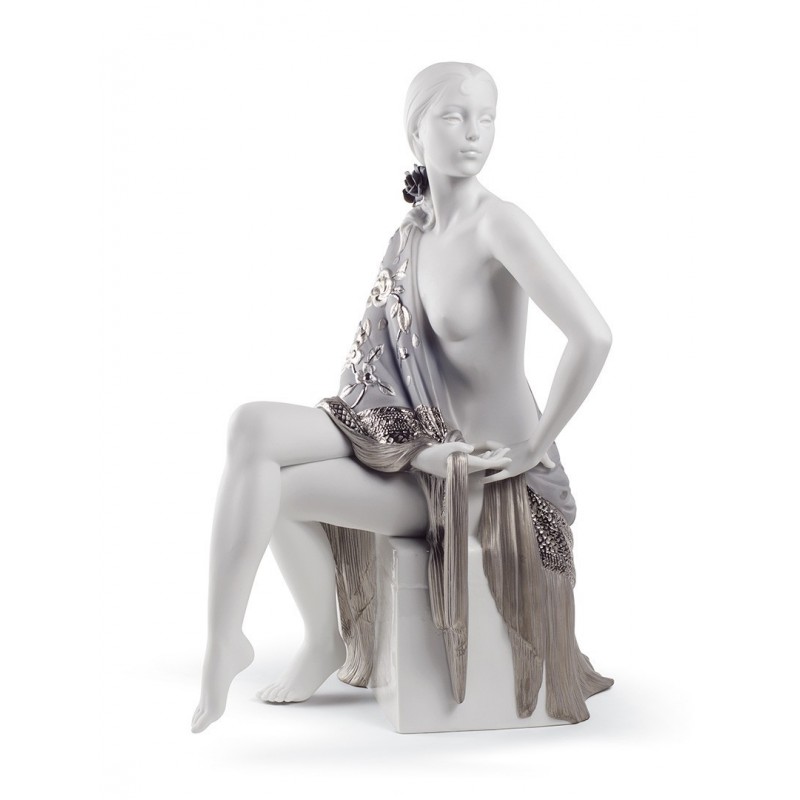 Sculpture made in white porcelain, biscuit finish and platinum decoration.

Eva María Cuerva was born in 1976, belongs to the guild of Fallas artists of Valencia, was formed in the company Lladró and has more than thirty years of experience.

The sculpture "NUDE WITH SHAWL" has a clear inspiration in the work of the painter Julio Romero de Torres.

JULIO ROMERO DE TORRES: He was a Spanish symbolist painter. Born in a family of heir to the best Spanish tradition, he was born in Cordoba on November 9, 1874, and died on May 10, 1930.

Notable works: The gypsy muse; Altarpiece of love; The sin; The grace; The little piconera.

The muse: María Teresa López when she was 14 years old, could not have imagined that it would be the image of the masterpiece by the Cordoba painter Julio Romero de Torres, who with the production of La chiquita piconera in 1929 reached its artistic fullness.

However, Mª Teresa did not receive the support of the Cordovan society when 89 years ago she discovered her shoulder and legs, and leaned in a suggestive and sensual way to form the masterpiece of Julio Romero, and become the symbol of beauty of the Cordovan woman.

María Teresa López has been the image of banknotes, postage stamps and advertising brands and the brunette woman of the copla. The price he had to pay was the one that marked the hurtful road of gossip, which drew a romance between muse and painter at a time when the beauty of a stroke was confused with obscenity.

She always denied the relationship with Julio Romero, who was forty years older than the model. But, despite denying it, the gossip marked her life, and she was left alone, isolated and full of bitterness.

María Teresa López would have liked to be a guitarist, writer or singer, but from a very young age she posed for Julio Romero de Torres, first with her face and then with her body.

She was not a singer, a writer or a guitarist, but for many it was something more. When it was more difficult to be, it was the symbol that makes evident that art goes ahead of obtuse mentalities. Time has given it a reason.

Rococo Lady in the Dance

€500.00 €450.00
 Quick view
Reviews
We use a comment moderation tool on this website to ensure the correct use of customer reviews. All the reviews on this page are ordered by date. You can read our review system rules here: Privacy Notice